I upgraded to OS X 10.7 Lion a few weeks back and have been “enjoying” its new characteristics.  I have a few complaints, but overall I am generally happy.  I used to suggest to most folks considering an Apple OS upgrade to wait for the first OS update from Apple (10.7.0 to 10.7.1) before upgrading so that the “paint can dry.”  The same holds true with Lion.  That update has since been released and the next is on the way.  However, this time I would also suggest that unless there is some specific feature that Lion offers that you need, wait an update or two more.  Here are the problems/quirks I’ve encountered so far.

I tried very hard to get used to the “natural scrolling”.  This new feature basically makes the touchpad scroll like the iOS devices do (which is backward than the way it used to work.)  This actually makes a lot of sense and I found that only after an hour or my mind got the hang of it.  I think it really is better.  I thought, “This will really work because I don’t use my trackpad on my Windows laptop at work so my brain won’t have to adjust.”  Except….

For some unknown ergonomically-challenged reason Apple chose to also apply “natural scrolling” to the mouse wheel.  Reversing the mouse scrolling is not intuitive at all!  While it might make sense for the multi-touch magic mouse it doesn’t not make mental sense for a standard scroll wheel.  Add on to that the fact the I use my scroll wheel on my work laptop all the time.  There was no way my brain could switch back and forth between them.  As of now there is not a way to independently leave natural scrolling on for the trackpad and turn it off for the mouse.  Although, the system preferences imply you can because there are two independent checkboxes in the trackpad settings and the mouse settings.  However, these separate checkboxes affect the same setting (and don’t update the other checkbox to reflect the change–bad UI design Apple!!)  I haven’t found a online hack to allow this other than having to buy a third party mouse utility like USB Overdrive.

I was pretty bummed by this limitation and had to switch natural scrolling off.  Boo, Apple! 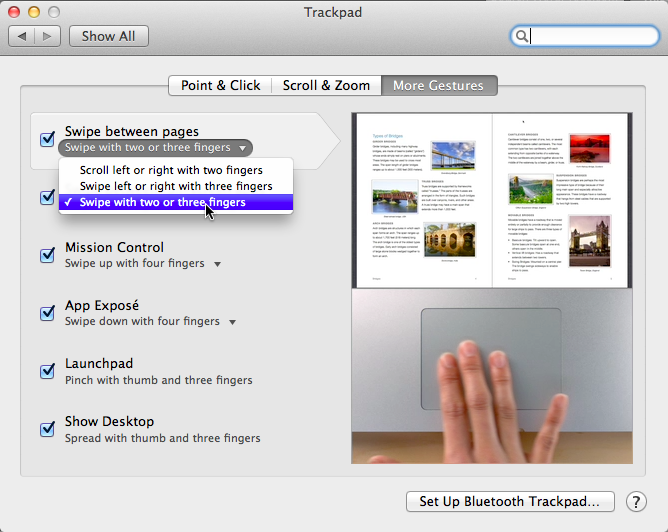 The second issue I had was merely a default setting that needed to be corrected.  The default setting for: System Preferences->Trackpad->More Gestures->Swipe Between Pages is “Swipe left or right with two fingers”.  This seems to disable multitouch swiping in all other applications except Safari.  Thus I noticed swiping to navigate was no longer working in iPhoto.  I needed only change it to “Swipe with two or three fingers” and things were back to normal.  My complaint is that it took me doing a Google search regarding iPhoto before I figured it out.  It seems counterintuitive to me that Apple would enable this setting such that it affected so many other applications.  I’m sure newer Apple applications will make use of the new gesture.

On the positive note, Preview now has a nifty set of screenshot options in the “File” menu with which I made the screenshot above.

My last issue is with iCal.  I’m not a fan of the new look.  I realize Apple is trying to help transition customers to the whole new iPad and touch ethos (and new customers coming in from that world.)  However, making iCal look like a real leather desktop calendar is, well, cheesy.  I’m using one of the worlds most advanced laptops.  Same complaint goes for the Address Book app.  Why the heck would I want my calendar app to look like a leather desktop calendar which I haven’t used since…ever.

I find the delay imposed by transitioning between months (in month view) a needless delay.  I did find that once I adjusted the scroll setting listed above that I can transition between months without the animation by using a three finger swipe instead of a two finger swipe.  I do like the new day view, however.

My last issue with iCal is not new and that is the event editor needs popup calendars when choosing dates.  Also, a quicker method for choosing the time for the event could be handy.  I did go to Apple and give them feedback about the iCal issues.  I should do the same for the mouse and trackpad issues rather than just complaining to the intergooglewebs.

Lion won’t allow backing up via Time Machine to a networked Samba share.  Only AFP (Apple Filing Protocol) shares will work.  While this may seem like a niche geeky requirement (OK, it is) the fact that I used-to-could do this in Snow Leopard and can’t now has forced me to go out and buy an Apple Airport Extreme primarily to serve as my network attached storage.  Of course, this was probably Apple’s intent.

Granted, there were still other options like me setting up a Linux box to serve this function.  But, my intent was to backup to my media computer (the kid’s computer) which is acting as my always-on iTunes server for my Apple TV.  Since it is a Windows computer (unfortunately) I can’t just setup a share from it to which to backup my laptop.  And, I didn’t want to have to run yet-another-power-hungery-computer all the time.  So, my compromised was a refurbished (purchased from OWC) not-so-power-hungry Apple Airport Extreme which will have two laptop hard drives hanging off of it via a USB hub.

As an aside, Apple updated their version of AFP (the Apple Filing Protocol) in Lion and NAS providers that used the open-source version of AFP (netatalk) were scrambling for awhile awaiting the open source version to be updated.  There was a bit of a saga about this hiccup.  Though a temporary glitch, it was a glitch nonetheless.

Though those are several fairly significant (in my little universe) complaints, I do like many of the new Lion features.  Mission Control is cool.  Versions is sweet.  Time Machine backup from an encrypted home folder while logged in is much needed.  The list goes on.

P.S. Here are honorable mentions in the complaint contest: